Recently my girlfriend gave me a quarantine haircut, and I thought it would be funny to take some progress pictures and try to see if I can string the images together into a stop-motion gif or video using FFmpeg.

For this, I have a set of ~40 iphone photos that I want to try to string together into an animated/stop-motion style video or gif. Here's a sample of the images I'll be trying this with: 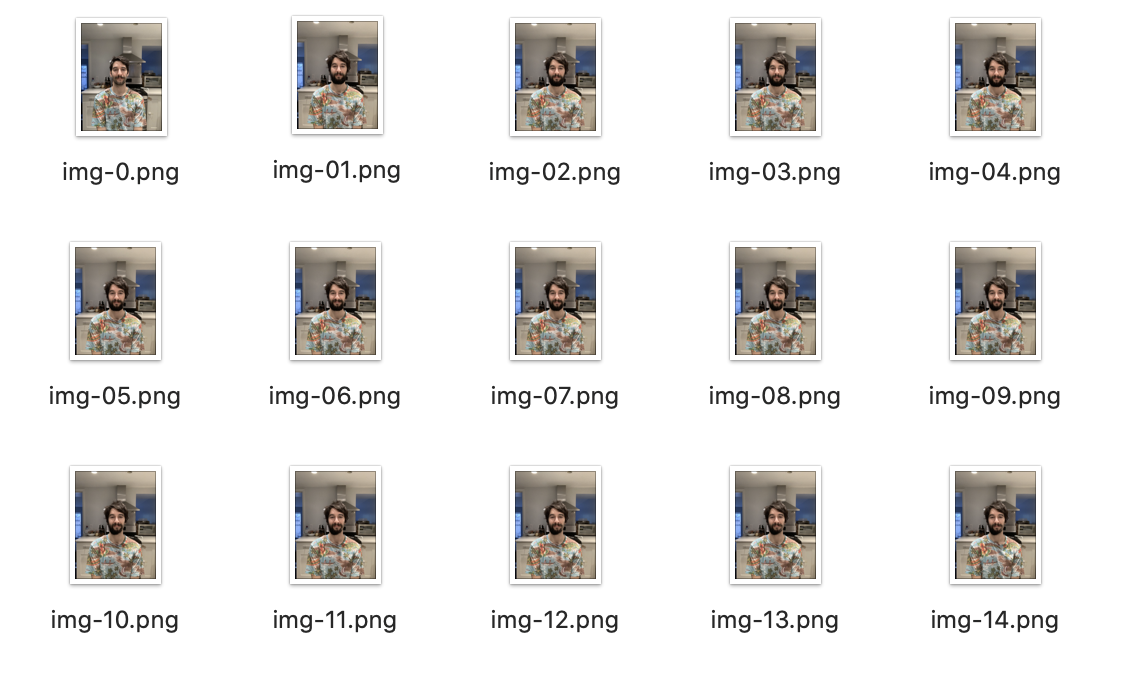 Before we get started, because I'm using images taken on a newer iPhone, the file type of these images initially was HEIC instead of a more familiar format like JPG or PNG. I want to convert these files to instead be jpg or png images. If you have imagemagick installed, this can actually be done quite easily using mogrify. For example:

Thank you to this post from zwbetz.com and these examples on imagemagick.org for this tip!

This command will create a new jpg file for every HEIC file in the directory we run it in. Note that this will not delete the original HEIC files from the directory.

So now to recap from the previous post, the most basic structure for doing something with FFmpeg is this:

The first issue we are going to run into here is that I have multiple image files that I want to use for the input, so we need to figure out how to handle that. After a little bit of research, it appears that you can glob together files by doing something like this for the input:

So basically, I'm going to sequentially name all the images in the folder (e.g. img-01.png, img-02.png, etc.), and we can use this command to glob them all together for our input.

Converting images to video with FFmpeg

Now that we have the input for our command, we can see what happens if we simply try to create an output file with a .mp4 (video) file type.

I also want to set a specific framerate for the output file we will be creating. Looking at FFmpeg's documentation, there are a few different flags that it looks like we can use related to this; for example -framerate and -r. Here's what the FFmpeg docs say:

I don't know exactly what all the implications of this are, but I've seen some examples on stackoverflow where people will set the -framerate flag before the input and use the -r flag before the output, so let's try that out. So here's my initial command to try to create a video from my images:

This seemed to work okay initially, however after trying to send the video result to my iPhone and not being able to play it, it seems like the resulting mp4 video file this command creates is somehow corrupted.

After digging through some stackoverflow threads, I found some additional commands we can apply to try to fix this problem. Here's what my new script looks like with these added:

Let's dissect this a little:

This command will use the libx264 video codec for encoding/compressing the video file we want to create.

This command sets an fps filter to the specified frames per second that I want.

After putting all of that together, and re-running my command, the resulting video now appears to work, and is able to be shared to my phone without issue! Here is the result:

Because the original images coming from the iPhone were rather large, we can reduce the final ouput file size by adding "scale=w:h" to set a specific scale in our filters. So here's what my final command ended up being:

If you want to take this approach and create a gif as your output file intead of a video, just change the file format for the output file in the command from .mp4 to .gif. Because you are no longer creating a video, you can also remove -c:v libx264 from your command.